If you’ve read the books about my family, you know that I love solving mysteries. I work with my brothers and sisters, and I’m in charge (I’m the oldest, age 11). But each of them helps out in different ways.
Have you ever wanted to be a detective? I love Science. It’s my favorite subject in school, besides Gemara. We use a lot of Science in our detective work. But there are a lot of other things to keep in mind If you’re interested in doing detective work. Here are some tips:
Learn to spot clues. Anything can be a clue — and clues can be anywhere. When our neighbor Mrs. Rabinovitz called us about her Chanukah candles disappearing from her menorahs (she had eight menorahs!), we found a hair on the table where the menorahs sat. (We took it home and looked at it under our microscope, to see what we could learn.) But we also found a clue on a little tablet she kept in a drawer. (Of course, we asked her before we looked in the drawer. You don’t go snooping around someone’s house without asking permission.)
Most clues will be right out in the open. If you see something and you can’t figure out what it is, or if you see something that looks out of place, it could be a clue.
Read lots of mystery books. I learned a lot by reading about how other people solved mysteries. Reading will help you understand the steps to take in your detective work and give you some ideas about different ways of looking at things.
Get Help. When I started solving mysteries, I wanted to work alone. But Ima insisted I had to include my brothers and sisters. And, you know what? They really help out! Yeah, Yitzy, my eight-year-old brother, gets a little carried away telling jokes. But sometimes it helps loosen up a suspect, so the person tells us what we need to know. Miri is only four, and I thought she’d be no help. But she’s so little, she sees clues down low that the rest of us don’t! We couldn’t have solved the Case of the Unfair Science Fair without her.
Don’t take on mysteries too big for you. Most important in detective work is staying safe. Don’t get involved with strangers. Stay in your own community. If you see or suspect a real crime, stay away! Tell your parents. They’ll know what to do.
Be Kind and Respectful. Doing detective work means you’ll have to ask questions. Don’t accuse anyone. Just ask your questions and let the truth come out. Sure, you want to solve your mystery. But afterwards, you want to still have your friends and know your neighbors still like you.

Hi, everyone. We’re the Five Star Detectives, and we work together to solve mysteries.

My name’s Shimmy, and I’m pretty much in charge of the Five Star Detectives. (I’m the oldest, age 11). But my brothers and sister all help out in different ways.

Adina is 10, and she’s real into art. She’s got a real good eye for that, so sometimes she sees clues the rest of us miss.

Yitzy is 8. He likes to tell jokes. Sometimes that can be pretty annoying, especially when you’re trying to concentrate on the clues. But other times it makes us laugh. And sometimes we really need to laugh. Things can get pretty tense when the clues aren’t adding up. Or pretty sticky if you have to interrogate a suspect, especially if the suspect is your friend — and you want to keep it that way.

Nosson is 7. He’s our note taker. He’s just learning to write, and he’s not very neat. Besides that, he doesn’t spell so good. Sometimes it’s not easy to figure out his notes, but in the end those notes usually help out a lot.

Miri is only 4, and she’s pretty cute. I used to think What can a really little kid do to help solve mysteries? But, after our two big cases, I learned the answer is: A lot!

All the Five Star Detectives are going to take turns writing here. Adina will probably have to fix Nosson’s spelling. And I can’t think of how Miri is going to write anything. But she always wants to do what the rest of us are doing, so she says she’ll write. And, who knows? Like I said before, sometimes the littlest Five Star Detective can surprise everyone!

Books for middle grade readers and teens are available through Menucha Publishing. To order, CLICK HERE. 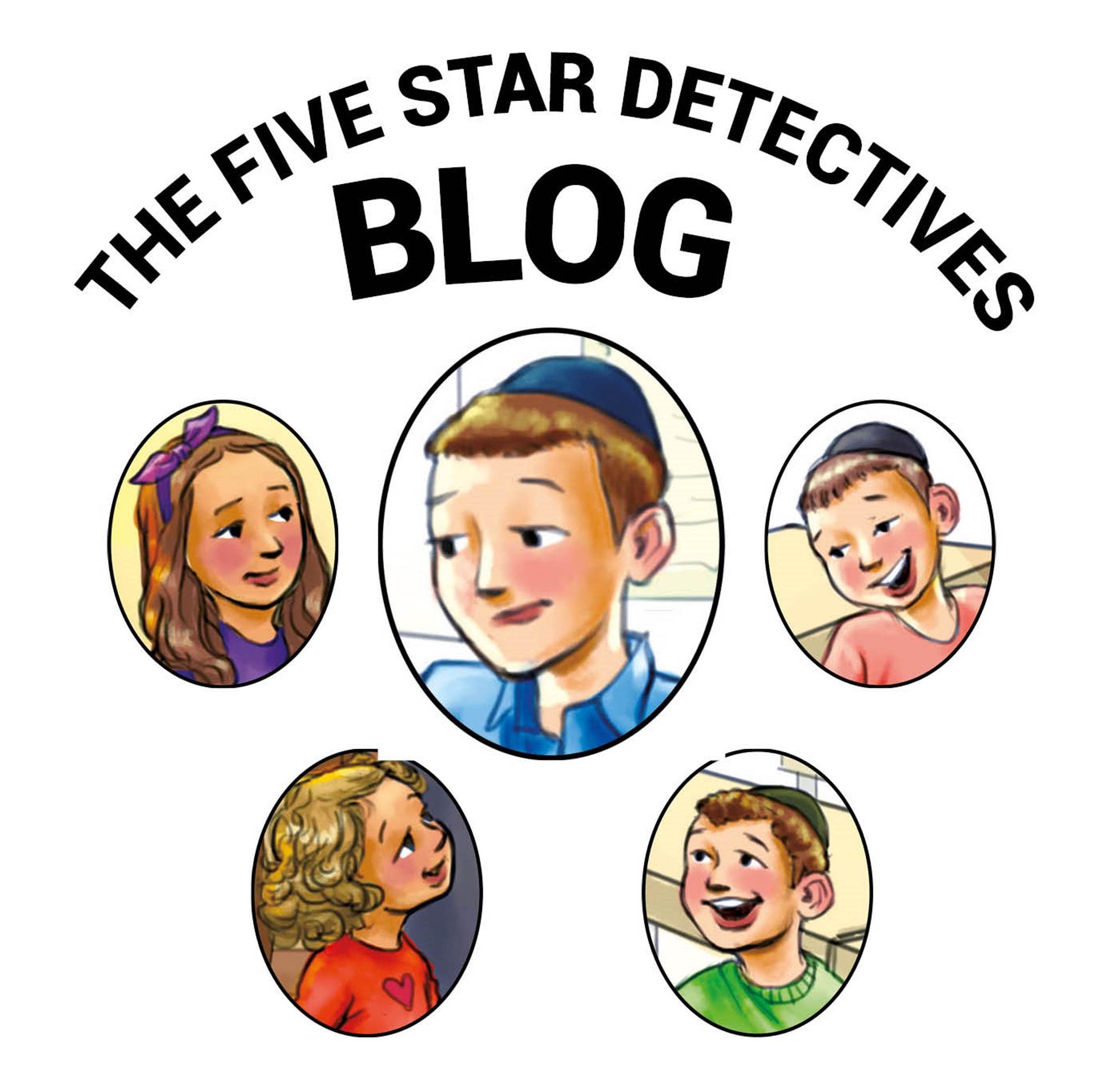